Discover the universe of La Grande Ligne (The Great Line), where giant train-cities roam the unforgiving desert world of Torus, collaborating to ensure the Humanity survival.

Unravel the secret surrounding Torus History and the people chasing the twilight sun on it.

Build a sustainable industry, economy, science and culture to allow your people, and their men and children, to thrive.

Hi! We had a chance to play your game over the weekend!  The concept of this game is really cool - resource management on a train!  The music was amazing and beautiful and fit the mood of the game perfectly.

We know this is an early version, but are looking forward to more!  We have left some detailed comments below about things we found that might be good to implement or do at some point:

* Music at the beginning is amazing.

* I think when speeding up time, after a task completes it would be good if time slowed back down to 1x while the dialogue is going.

* It was difficult to get a grasp of the progression in the beginning because we weren't sure how everything was supposed to fit together and were overwhelmed by choices.  One idea here is that during the Tutorial sections, only allow building the component that is required for the tutorial.   This way the player doesn't get confused on what they are supposed to press.  As the tutorial continues, more and more things will be unlocked to build, and eventually the player will have all things to build after all tutorials are finished.  Would be good to have some UI elements for tutorials to show player where to click and stuff in the beginning.

* Save game needed! We accidentally clicked out of browser while building a super long train

* Would be good to have a way to know when player is about to die from heat or cold.  We died without warning, and didn't realize we were too cold.

Overall we love the direction of this game and think it has a lot of great potential.  We found ourselves trying to build the longest train we could :-D  The music fit the mood perfectly.  We can't wait to play more in the future,

Thanks for letting us test out your game!!

Thanks you so much for having taken the time to review and comment. your comments are very precious for us to improve the game ! Stay tune for further patches & development. 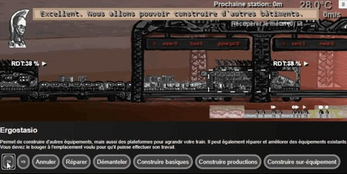